Boy O’ Boy! Things have been really looking up for me and the Funny Dog! Portugal has been treating us with kindness and generosity, views and better views, smiles and stares.

Matthew is the navigator, you know, who gets us lost everyday… But I don’t blame him, since we don’t know Portuguese. We left Lisboa a little bit after noon on Monday. Before we left, we had been interviewed by puppets and it was great! The Urban Garden Hostel in Lisboa treated us wonderfully and if you’re ever in the area, for 10 euros a night, it’s the best deal around.

Matt and I had our navigating troubles when leaving Lisboa… We took cobblestone alleyways, wrong turns, and ate under an overpass. Once out of the city, it was only another 30 km to Pedro’s mothers house in Alenquer. It should have been easy… but no one told us Portugal is windy! I’m talking 30 mph gusts straight at us, even on our uphill climbs! Whew, it was a workout, but eventually we pulled into Alenquer only a little after the time we said we’d be there.

Once in Alenquer, we got lost… Knocked on the wrong door… Pedro wasn’t there… I asked directions at a Cafe… She didn’t speak English… Through hand motions and lots of not understood words I translated that we had to go back where 2 roads meet and that we had bikes with us. Unhelpful, though she tried and I cannot blame the kind lady. It did make me smile though, LANGUAGE BARRIERS!

We finally found Pedro’s, or should I say, Pedro found us. He drove by us and clearly spotted the two touring cyclists. We got to his house and took showers. We met his mom and his girlfriend, whom were both kind but spoke little English. Pedro was a wonderful host and an overall great guy. We chatted about bike touring, shared stories, and a lot of laughs. His mom made a wonderful dinner and then we ate cat litter (Pedro is tricky and a jokester). He ate the cat litter too, though.

We got a good nights rest and had a great breakfast! We left Pedro’s in the morning and were en route to Hugo’s in Obidos! It’s an old town built in castle walls… its pretty great! However, this is all I want to type… I am tired, it’s wonderful. Cheers. 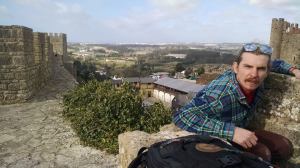 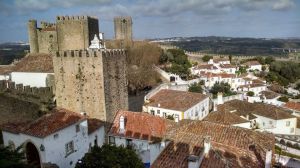 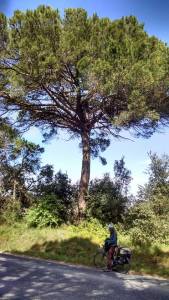 Loot at me go!

Donate to the Arthritis Foundation at the link below in here around this text!